With the advent of free agency, the day when players would stay with one team for the majority of their careers has gone the way of leather helmets and high top cleats. Today, pro athletes move from team to team with the speed of a pre-game wind sprint. Increasingly, stars notwithstanding, fans are rooting for team colors as much as for the players wearing them.

But with NFL players continuing their protests against police brutality during the national anthem, NFL TV ratings, game attendance, and merchandise sales have also continued to decline as fans pull back in their own counter-protest. The situation has left NFL commissioner Roger Goodell in a delicate no man’s land.

On one side are the players, 70% of whom are African-American, men with real-life attachments to the disorders and denials of daily black existence in America that their athletic prowess has afforded them fiscal and physical, if not emotional, separation from. On the other side are the fans, 90% of whom are not African-American, because that is the racial makeup of the nation. And that 90% watches the 70% on Sundays to escape the news that has brought the players to their knees. 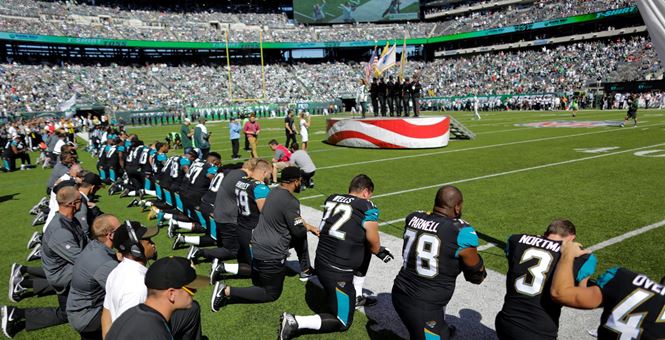 Last week Mr. Goodell met in New York with the team owners and player representatives to try and resolve the issue. There, as reported by ESPN, Houston Texans owner Bob McNair said of the protesting players, “We can’t have the inmates running the prison,” a phrase that struck many as inappropriate, some as borderline racist – McNair later said he regretted it.  For his part, Goodell said he believed everyone should stand for the national anthem – “That’s an important part of our policy,”  – but would not mandate that the players do so.

That stance did not sit well with many of the 90%, including the President of the United States, who first suggested that NFL owners should fire “son of a bitch” players who kneel during the anthem (which only ramped up the following week’s protest from a handful to over 200). Then, after Commissioner Goodell’s meeting with owners and player reps, the president tweeted: “The NFL has decided that it will not force players to stand for the playing of our National Anthem. Total disrespect for our great country!”

And here I thought love or devotion to one’s country (patriotism) was a feeling that welled up inside you, then sought outward expression. I realize public education has regressed, but are schools still teaching that dissent, protest, and the freedoms of speech and press are the bedrocks of the country’s founding? Compulsory patriotism has another name, they call it tyranny, which strikes many as oxymoronic in a nation that bills itself as free.

But the First Amendment is not a blanket protection, as any arsonist in a crowded theater can tell you. Harvard Law School professor Mark Tushnet told MarketWatch, “Private-sector employees are genenrally employed at the will of the employer, and their employers can fire them as they see fit. That includes disagreement with what they say in public.”

Rights notwithstanding, owners also have to be careful. Professional athletes aren’t just any employees, they are unique talents who are not easily replaced. Besides, if patriotism has to be mandated, it forfeits its definition. And furthermore, why would we still be having such a big problem with North Korea?  Isn’t forced patriotism part of their MO, too?

TONI REAVIS is a veteran broadcaster/writer who has been informing and entertaining audiences for over four decades with his signature baritone pipes, encyclopedic knowledge, and sharp wit. One of the most respected names in running journalism, Reavis today mixes his passion for sport with his wide-ranging interest in politics, media, and culture. Currently residing in San Diego, California where he writes his influential tonireavis.com blog, Toni also serves on the board of directors of the Entoto Foundation, a 501C3 charity that brings needed health care to Ethiopia. In 2009 Reavis was inducted into the Running USA Hall of Champions. ***** View all posts by Toni Reavis

“A nation of sheep will beget a government of wolves.”
― Edward R. Murrow

IS AMERICA READY TO COME BACK?